To fulfill my capstone project requirement for the Carnegie Mellon University (CMU) Master of Computational Data Science (MCDS) program, I and two of my classmates, Ziyan Zhang and Xiang Yue, collaborated with DataStax to develop a new module in the Stargate system to bring Amazon DynamoDB compatibility to Apache Cassandra.Ⓡ I will introduce our journey in two blog posts. Here in Part 1, I will provide some background on the project and describe the overall design of our system. In Part 2, I will discuss some interesting challenges we encountered and how we solved them.

Cassandra and DynamoDB are two popular NoSQL databases inspired by Google’s BigTable and Amazon’s Dynamo papers. They have many similarities but I think it is more useful to look at some of their biggest differences:

There are many more differences, but the first two illustrate why it might be a good idea to use Cassandra instead of DynamoDB, and the last two point to the potential difficulties in switching to Cassandra if you decide to use DynamoDB and later regret that choice. For users that are already using DynamoDB or already have expertise in using DynamoDB, switching from DynamoDB to Cassandra might be too costly.

Stargate is an open source data gateway that sits between your app and your databases.

The figure below shows the Stargate (v2) architecture. As described in this blog post, Stargate (v2) is highly modular. There are already many services that provide different kinds of APIs. Our goal was to create a new service that provides a DynamoDB API. We wanted this API to be able to understand DynamoDB queries and transform them into Cassandra queries and for users to be able to continue using their existing DynamoDB client code to interact seamlessly with Cassandra. 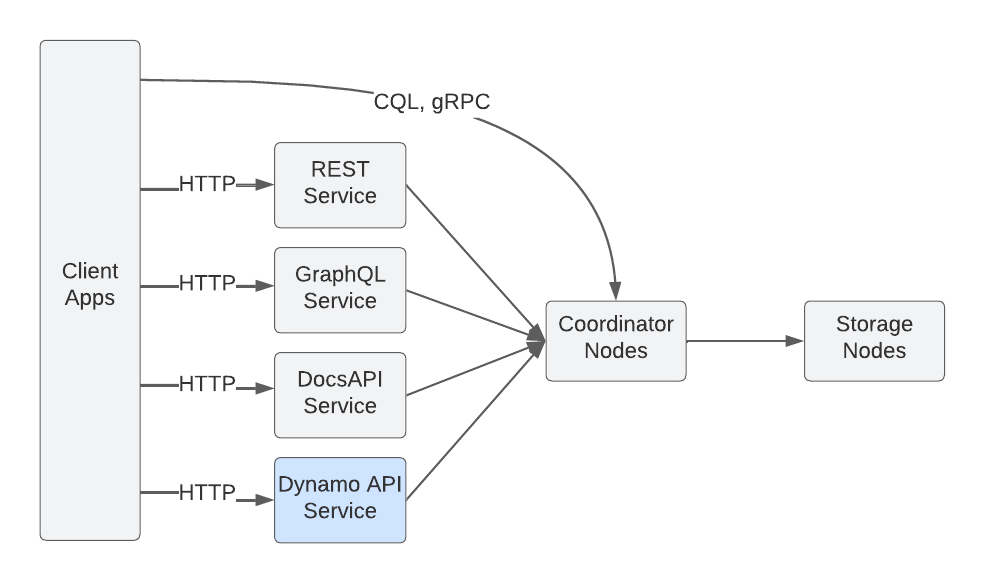 We didn’t want users to have to change a single line of code when switching to Cassandra. But wait a minute…how is that ever possible given Cassandra and DynamoDB have different client libraries? The answer is simple: DynamoDB clients talk to DynamoDB servers in HTTP protocol.

By implementing a web service on top of Cassandra that behaves in the same way as the DynamoDB server, DynamoDB clients could continue to work without knowing it is actually talking to Cassandra. We implemented such a service as a new module in Stargate - the Dynamo API Service. A typical workflow is shown in the following diagram. 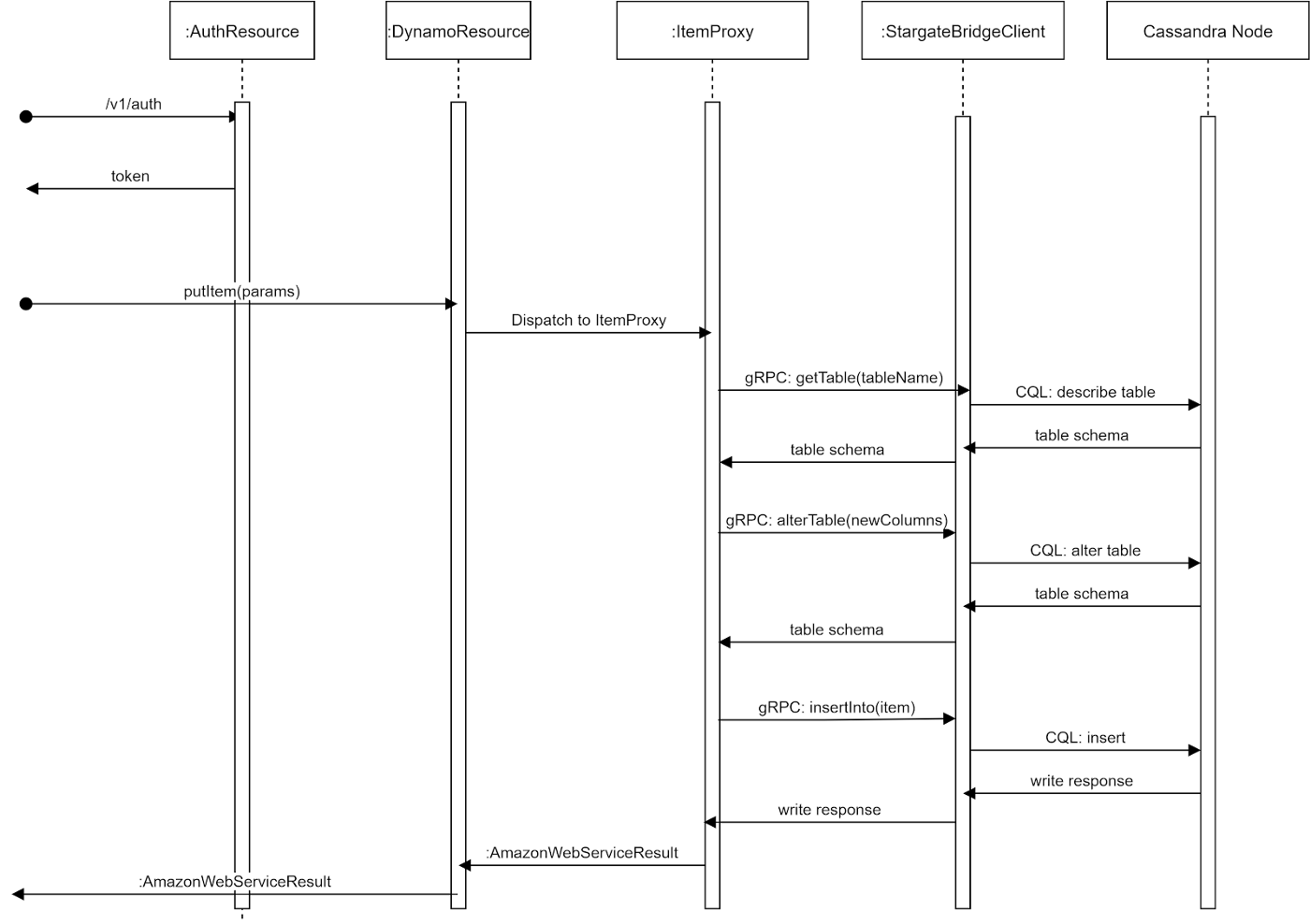 The sequence diagram above shows the workflow for DynamoDB PutItem API. Let’s ignore the first component AuthResource for now — all we need to know is that it helps with authentication. By using the DynamoDB client to put an item into the database, the client would send an HTTP request to the configured DynamoDB server endpoint. To use our system, users just need to change their endpoint from AWS to our service. It’s just one line of configuration change! Then everything is handled by our service and Cassandra.

Let’s get back to the sequence diagram. After receiving an HTTP request, DynamoResource, our REST API controller, will recognize the type of request, deserialize the parameters, and then dispatch them to an appropriate Proxy class, in this case, ItemProxy. The ItemProxy component takes the main responsibility of handling the request. Specifically, it needs to parse the request and transform it into a Stargate intermediate representation. You may ask, why an intermediate representation and not a Cassandra query directly? As we said earlier, Stargate is a middleware that sits on top of your database. Although the database we are using is Cassandra, it could be any other database as long as Stargate supports it.

By transforming DynamoDB request into Stargate intermediate representation, we leverage the Cassandra adapter that is already implemented by Stargate. After transforming the request to Stargate intermediate representation, ItemProxy sends it to the Stargate coordinator via StargateBridgeClient which is essentially a gRPC client. The Stargate coordinator then talks to Cassandra nodes and returns the results back.

Note that some requests are straightforward and only need one round-trip between Proxy — Stargate Coordinator — Cassandra cluster. Other requests are more complicated and may need multiple roundtrips. In the PutItem example shown in the sequence diagram, three round trips, at most, are needed. How come we need three round trips for a single write operation? That’s due to the schema difference between Cassandra and DynamoDB. Remember that in the beginning, we said DynamoDB is schemaless while Cassandra is not? That means you could insert an item to DynamoDB with new columns without pre-defining the schema (actually you cannot define a schema in DynamoDB), while you couldn’t do the same for Cassandra.

In Cassandra, if a write operation contains columns that are unknown, the request fails. Therefore, ItemProxy needs to first check whether the schema needs to be updated and if so, it must update the schema first before actually persisting the data. This sounds very slow, isn’t it? Luckily, Stargate has a caching mechanism, and most of the time, the schema will be cached and the overhead is small unless new columns appear frequently. \

Now that you understand our motivation and the basic design for our service, stay tuned for our next blog in which I will talk about some interesting challenges we encountered and how we solved them.

Special thanks to all the members of the Stargate community who supported this effort including Prabhat Jha, Sebastian Estevez, Tatu Saloranta, and Jeff Carpenter.